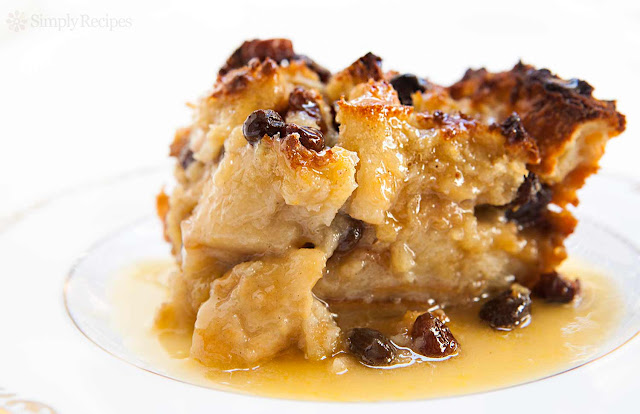 Break up white bread into small pieces and place in colander. Run water over bread in colander until soft. Squeeze out as much excess water as possible.
In large bowl mix bread, raisins, vanilla, egg, nutmeg, cinnamon, and sugar together with hands.
Place mixture in baking pan, and pour evaporated milk over the top until it completely covers the pudding.
Place pats of butter on top of mixture, sprinkle with cinnamon and sugar, and bake at 325 to 350 degrees for 45 minutes.
Serve warm, sliced into squares, with whiskey sugar sauce (recipe below).
Recipe for Whiskey Sugar Sauce
1 stick of melted butter
1 ½ to 2 cups of sugar
raw egg (beaten separately)
½ jigger of whiskey/bourbon
Mix above ingredients together. Spoon onto individual squares of bread pudding. Keep refrigerated.
Posted by Unknown at 5:37 PM No comments: