Stories From The Carolina Coast: To Seafood Is To Love Food

Stories From The Carolina Coast: To Seafood Is To Love Food:      Fish fry's in the Lowcountry have always been an event that brings together friends and family to share in the bounty of our areas la...
Posted by Unknown at 11:14 AM No comments:

Diary of a Hurricane Blogger: Whats in a name

Diary of a Hurricane Blogger: Whats in a name:     OK,where do I start?   The Name. Gator HOoooo isn't about the U of Florida or any wild life preservation group,or even one of those grea...
Posted by Unknown at 7:24 PM No comments:

Stories From The Carolina Coast: To Seafood Is To Love Is To Love

Stories From The Carolina Coast: To Seafood Is To Love Is To Love:      Fish fry's in the Lowcountry have always been an event that brings together friends and family to share in the bounty of our areas la...
Posted by Unknown at 8:55 PM No comments:

To Seafood Is To Love Food 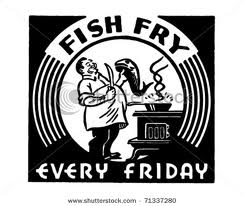 Fish fry's in the Lowcountry have always been an event that brings together friends and family to share in the bounty of our areas lakes, creeks and of course the ocean. Fry's come in all shapes and sizes, it might be as simple as  cornmeal rolled Bream,Crappie  or squealers(small catfish) or a true banquet with a cornucopia of all the oceans goodness from shark steak or spanish mackerel to fried oysters and scallops. One of the great things about the south is that you never show up empty handed. While in college I picked up this recipe and I use it whenever I'm invited to anything having to do with our aquatic friends. It's not hard, it only takes a little patience (that's all I have) and it makes you look like you grew up in a restaurant. 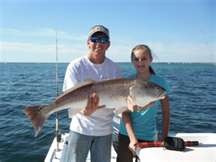 Fried Fish With Seafood And Artichokes 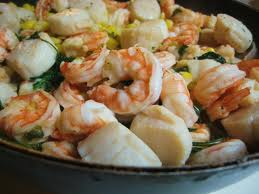 
Here's where it gets fun.
In a deep(I mean deep) frying pan add the olive oil and 1 stick of margarine and turn up the heat to high. Salt pepper and garlic your fish and then coat with flour before gently placing them in the hot pan. Don't overcook,just gently brown both sided before removing the filet's and placing them in a pan in your oven to stay warm.Turn your burner down to simmer and Deg-lase( Fancy term for  using a liquid to help scrape all the good stuff free from the bottom of your pan) the pan with white wine. Into the freshly deg-lased pan add everything else except the shrimp or scallops. Let everything simmer for 15 minutes before stirring in your shrimp and scallops,,,,,,TASTE, TASTE, TASTE. Salt pepper and garlic to taste,,,go light seafood swims on its own.
Take your fish out of the oven and lay over the mixture. Spoon some of the goodies over the fish and lets simmer for 10 more minutes. just like everything else in Charleston its served over rice.

Half Rubber For a Whole Summer 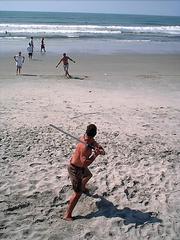 A half a rubber ball went sizzling by my head, so close you could smell the thing, spinning as it went by,sending a fine trail of sand into my eyes as it passed. Forcing me not for the first or last time to take a quick seat in the hot august sand. The cut off shovel handle I was using as a bat cascaded toward the Atlantic House Restaurant, bringing on another chorus of laughter from the apposing team as I brushed myself off and stepped back in to take the next pitch. That one was close I thought. The pitch had started out 3 feet behind my left shoulder and 2 feet above my head before curving back toward the plate in an arc most physics professors would have considered impossible. The next pitch came blasting towards me in a straight line at 80+ mph. It started out a foot off the ground before rising to above my shoulders as it reached me and  I realized as my swing badly missed that it would have sailed another 1/4 mile if the catcher hadn't made a great jumping one handed effort to knock the ball down. The next pitch was another breaking ball, but unlike the previous one it came in on its side, catching too much of the plate and seconds later  a WHOMP sent it retracing it's direction before landing on the deck that separated the Atlantic House from the Over the Ocean Bar.....HOMERUN,,,No more laughter. No running needed, I walked over and pulled a cold Heineken from the cooler, now this is a game.
Half Rubber is a game hardly known off the South Carolina Beaches. Simple, basic, direct, laid back and challenging. It requires nerve, judgement and the ability to see something not for where it is, but for where its going to be. A social game that's also incredibly competitive  If it's not a metaphor for Southerners, I don't know what is.
It can be played in teams or just with a pitcher, a batter, and a catcher. All the equipment needed can usually be found in your storage shed. An old broom or shovel handle and a few rubber balls split down the middle and your in business. Unlike baseball the batter  is not out until he swings and misses and the catcher holds on to the pitch or if a fly ball is caught. An at bat can be anywhere from one pitch to infinity and singles,doubles,triples and home runs are judged by how far a hit pitch travels,,,,no bases needed,,,,baseball distilled down to its best and  most basic essence.Who needs all that running? Its too damn hot down here for all that nonsense. Again a very southern thing.
South Carolina has a history of great baseball from little league to the pro's, from "shoeless Joe" to Jim Rice and beyond. A few years ago we sent 5 college teams to the NCAA post season tournament and recently USC has won back to back national titles(this hurts my soul, I'm a Clemson fan). I wonder how many of those kids grew up honing their skills by hitting 1/2 rubber balls on the beach.
I've heard it said that like in life, hitting a curve ball is the toughest thing to do in sports. Looking for what is not quite yet and what just might be. Figuring out the the direction that the object of your goals is taking and then being ready to take a swing for the fences.Remember though, even if you strike out at least you picked up the bat, and if your lucky like in half rubber your field will be a beach.
Posted by Unknown at 1:44 AM 2 comments: