I dreamt an angel came to me and laid upon my bed.
She kissed my lips and closed my eyes and held my weary head.
In soft sweet tones she sang to me and this is what she said.
Sleep tonight in my arms, and dream of days ahead.
Always am I here for you, love and comfort till I'm dead.
And even then I'll come to you, my husband that I've wed.
So dream of Angels late at night and you'll find me in your bed.
R. Sweat 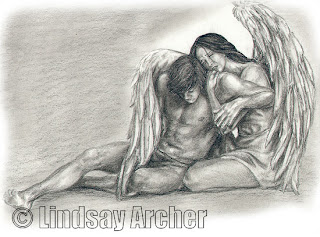 Posted by Unknown at 8:54 PM No comments:

I felt like being by myself, no one around to share this night.Sanctuary,a place to rest where the ghost of her cant find me.A place of secrets,hidden well, far from all the worlds sight.Somewhere I pray, not today the ghost of her wont find me.A quite spot, known to few, where dreams they do take flight.Somewhere, anywhere. where the ghost of her wont find me.When morning comes to me again and promises first light.
Another day, I've hid away, but soon her ghost will find me.
She looks for me when days are done, she dances with delight
I go to her, she leads me home, her ghost has finally found me.
R. Sweat
Posted by Unknown at 10:05 PM No comments:

I grew up in a time ruled by the great three Gods,the world new them as Ford, Mopar and General motors. They sat in bucket seated thrones on high and ruled the kingdoms of Rivers and Bushy Park . They held court late into the night in roadside castles known throughout the land as McDonalds, Roberts and JM Fields where they watched as their sons Mustang, Camaro, and Cuda fought a war for our hearts and minds. The weapons they bore were known throughout the land as Hemis, Cobra Jets, and Super Duties. Their hearts were made strong by Holley quads, Webber six packs, and fuel injectors. They cast their spell of power over us using the Magical, Mystical numbers of, 289,302,350,596,426,440 and 455, invoked by the great wizards from Detroit like Shelby and Yanko and we were mesmerized.

Battle was waged a quarter mile at a time, with the winner vanquishing his foe in less than 10 seconds as we cheered our hero's on. They roared great rumbling sounds of victory, as they rocketed away into the night, tires squealing, out of sight and into our memories. Leaving us behind, covered in great clouds of burnt rubber that anointed us as the chosen few. Left on our own to dream that one day we would get to be the sons of Gods ourselves.
Posted by Unknown at 9:42 AM No comments:

Postcards From the Folly Boat

I passed by the folly boat today in my travels and each time I do I cant help but think of all the history the little dingy has seen. For years it has served as the Lowcountries diary in times both good and bad, happy and sad. Weddings, divorces, births and birthdays have been posted for the whole world to see. Graffiti, prints and paintings some good,, some not so, have been debuted by countless artist over the years

For some mystical reason, both locals and tourist have shared their hopes and fears on her hull for all the world to see. Through hurricanes and warm summer days alike shes been equal parts billboard, friend, confessional booth, psychiatrist, rally point, and hallmark card. Always willing to listen, always willing to tell our stories until the next coat of paint from the next friend in need.

Without a sail or engine she acts as a metaphorical floating library, a lifeboat to the thousands of messages and lives and stories that would have otherwise have been lost to time. A time capsule in latex storing layer upon layer of our most personal past. Sometimes I wonder if she was already here when the first settlers arrived in 1670 or maybe it was them who left her, a maritime touchstone of sorts. A diary started in their time,as a way of connecting their lives with ours. Whatever the reason, the Folly boat has become for us, more than just another post card picture from a town filled with them. A mile marker more of time than distance,she waits patiently for tomorrow . Somehow the little white boat on Folly Road has become, luckily for us, our collective heart. A heart kept warm by coat upon coat hopes and dreams and wishes. A heart that we Charlestonians proudly wear on our sleeves for all to see.

R. Sweat
Posted by Unknown at 6:46 PM No comments:

Summer came to me through an open window last night.
From somewhere wind chimes played softly on the warm summer breeze,
As magnolias and wisteria sang a southern duet to the August moon.
In the distance a thunderstorm lent it's rumbling baseline to the tune.
It was a sound of Summer.

My wifes soft laughter filtered in from the kitchen and it made me smile,
Her fresh blackberry cobbler and sweet tea sat cooling on the counter,
Ice crushed as my son cranked the handle on the ancient ice cream churn.
A baseball game played faintly on a radio almost as old as the game itself.
It was the sound of love.

Summer came to me through an open window last night as seagulls took to flight,
it raced the moonlit waves past sand dunes to hammocks strung on palmetto's.
Past bonfires where young couples walk barefoot on the sand for their first time, as the waves pounded out a rhythm to the beat of their hearts.
It was the sound of forever. 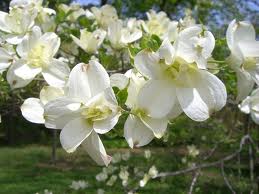 The Dogwood blooms told a tale of Spring. Their delicate flowers changing each day from translucent green to bright white. They looked to the warming March skies. Giving notice and a promise of renewal all across the South.
She had braced herself in the fall chill and kept her beauty hidden in her most stark form. Refusing to share her secret as Winter ravaged her naked limbs through the long cold nights, she saved herself for Spring.

Soon the dogwood would be the home for blue jays and cardinals returning to mate and renew their lives. Her soft green leaves would return to catch the soft rain and in Summer with a family of squirrels living in her branches she would fulfill her quest of hope and store the life that Summer brings in the roots of her soul.
A promise to the world once more that through our bleakest chill, she would return, when in our need as we look for signs and wisdom in the seasons and this land we love. When March comes around again and the dogwoods begin to bloom, renewing our dreams and hope .
Posted by Unknown at 3:41 PM No comments: