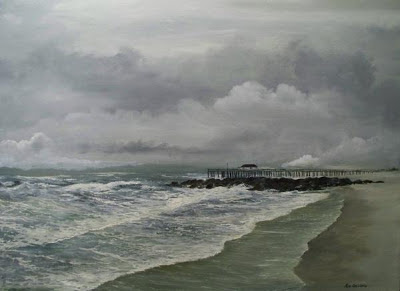 I walked out the door this morning to the smell of cord wood burning off in the distance. Like a memory it lingered, the only physical reminder of all that was, just a night before.
The cool damp air held the scent, bringing back a rush of memories from bonfires past and time not wasted on friends. Their names and their faces forever young and always with me.
Somewhere, out on the edge of perception a train rumbles toward its destiny with time, the rhythmic thumps providing a baseline to my now small town life. I feel it move away, leaving me in its past.
If the future is for the young, and the past given to the old, then surely Rainy Grey Days must be reserved for those who dream one last time, of what might have been, what should have been or what could be once again.
R.Sweat
Posted by Unknown at 8:00 AM 1 comment: 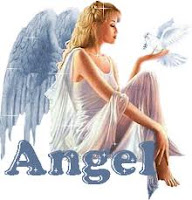 Its been long since I  lived in the light
Ever more content to be in the comfort of her gentle shadow
I inhabit a world made whole and home by the depth of an Angels  love.
Her breath fills me with life, as my heart waits to beat at her command
Allowed to be, only by a grace born of a creature not meant for this earth
I move around her on the darkened edge of a world lit in brilliance by her smile
Her spirit moves, and I move, wanting, longing, always to keep her touch
Heavenly light envelops and holds her form as my eyes strain to see and I am jealous
She passes and I feel the moonless tide shift and with it she turns her grace on me
I see the light of long darkened stars in her eyes as she takes me by the hand
Once again I walk in her light and see with eyes opened wide with hope
She whispers my name, and I follow, she kisses my lips and I am hers

Posted by Unknown at 8:05 PM No comments: 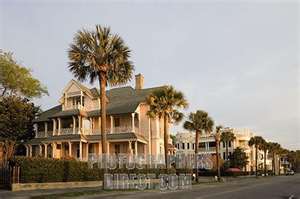 The shrimp boat slid into Charleston harbor. Its distinctive white hull outlined against the orange red of a setting Carolina sun. The only sound came from the squawking feathered multitude of gulls that swirled and dived for their dinner. It was a sight he loved no matter how many times it was repeated.
From the Battery he walked past the old ghost of mansions that fronted the harbor and East Bay. Greek revival palaces built for the shippers and growers of Rice,Indigo and Sea Island Cotton. Through their gates of wrought iron adorned with pineapples and rope he could see a joggling board waiting and hoping for just one more young couple to come courting. 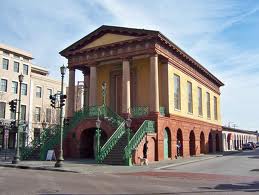 Walking  over the cobblestones that had come from all over the world as ballast in the hold of merchant ships from centuries past. The well worn stones of every color had finally found a home. Much like all the people who now call this port city their own they are now and forever a part of the fabric of the old town.
Darkness came and with it the city began to whisper, calling to one and all to embrace its seductive sirens call. The musk of her age mixed with the sweet scent of magnolias and gardenias from her hidden gardens and the aroma of 5 star restaurants that wafted in the breeze as he made his way down old Market street.
A horse and carriage moved down Meeting street with the ease of a scene that had been repeated for 300 years. The guide gossiped of revolution ,hurricanes, and pirates,but  he knew that if they rode all night. He still couldn't tell Charles Townes story. The first chapter would have to do tonight. Pointing out earthquake rods on  buildings, he tipped his hat as he passed, before making his way toward White Point Gardens. They faded away into the night until all that was left behind was the sound of hoofs taping out a secret love song from the past.
Passing under oak trees that had greeted the first settlers, he came to his church just as a wedding was ending. The strains of organ music lilted away to be replaced by the sound of joy and love and forever that filled the night. He slipped through the crowd almost unnoticed as rice filled the air and turned to walk through a small side gate and then behind the large white stone walls.
The night was almost over now. Salty sea air blew in from the harbor and it passed right through him as it cooled the fresh cut grass where he laid. Silence had returned to his world. From above a crescent moon looked back down on him for the last time this month and he was already missing it. It would be back and then so would he. As he closed his eyes and began to fade away into the first rays of morning light he was already planning his next walk around the old town. 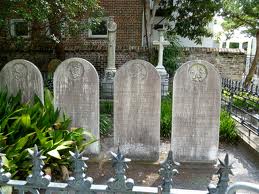