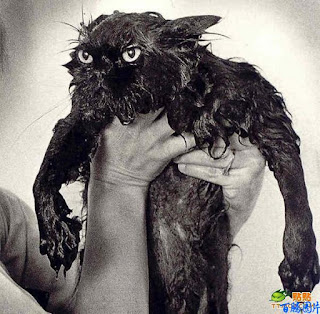 So the cat attached to my right arm is making that low pitched guttural sound again and I know that it cant be a good thing. It  digs in as it continues to climb my limb like its pursuing prey on a  human tree . My focus though is on the cat I cant see and just as my "Spidey Senses" are going off in my head it pounces with a yowling hiss that turns my blood to ice and my legs to jelly and just when it can't get any worse, I catch a glimpse of the nurses looking through the glass, crying in heaving fits of laughter.
Let me back up a little.........  I was a Pre-Vet major at the University Of West Florida in the late 80's, hoping to go to the University of Florida for vet school. My grades were good,  I had a 3.85 GPA and I did well on the MCATS.  I was a regular volunteer at the Pensacola Zoo, but being an older (28 years) out of state student I was always looking for something to give me an edge over other students. My lab partner in physics mentioned to me that a country vet in his area was always looking for help and he said he would put in a word and get me an interview. All was right with the world.
The Docs practice was about 2 miles out in the middle of farm country. A small hospital with a surgery, kennels, and a livestock barn all filled to the brim with every creature that you had ever seen on Animal Planet. In addition to the office work a great deal of the practice required house calls for larger animals. After an hour of interviews I was welcomed aboard and told to report Saturday morning for my first assignment, he said he was out of the office on house calls all day but his 2 interns would show me the ropes.   Something in me told me to RUN,,,,,note to self,,listen to that little voice.
Saturday I show up in jeans and a button down shirt with the sleeves rolled up, I thought I was ready....I met the two young ladies who were interning with the Doc and after a few minutes of small talk I asked.What do you need me to do first? I wasn't surprised at the answer. Clean the cages Cats first then the Dogs, I wondered why Cats first, little did I know I was being set up. But soon I had little time to think as I worked my way through the kennel
After a morning of cages and poop I had lunch with the girls where they told me they needed my help with a client who was coming by that afternoon with several dogs and cats from his farm. Happy to get out of poo detail I gladly volunteered. My job to give all the animals a flea and tick dip before kenneling them to await the Doc. . Seems that this farmer would bring his 6 dogs and 11 cats in twice a year to be dipped and seen by the vet. The dogs were beagles that the farmer used to hunt. They were happy, friendly and well,,,,, beagles. The cats were a whole different animal,,,BIG pun intended. Brought to the farm as mousers, The only human contact that they ever had was when they were fixed and their twice a year appointment with the flea dipper..today that meant me.
Posted by Unknown at 9:34 AM