Hell In An Ice Cube 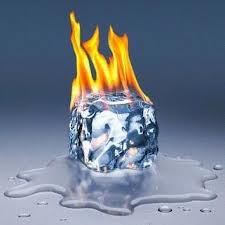 It was the cold wet wind that welcomed him on that first day of winter. He turned his head aside, tilting it quickly away and in doing so he let the frigid fingers of the December breeze caress his cheek with an icy touch born of a once jaded and almost forgotten lover. On his wind burned neck and face she had left her mark, a crimson reminder of winters frozen embrace.
God he hated winter,,,,,

In the background droned the local AM radio weatherman. A modern day version of the saints of yore, he had heard in this most desperate prayer, the deep, hushed, lilting tones of a southern accent and through his boom box confessional granted this plea for warmth and relayed it on to the powers on high. The prayer once answered returned to this mortal plain by way of the small transistor radio that he had carried since he was a kid.
Warmer days to come,,,,,,,,

Hell has always been depicted in books as a place where fire and brimstone would burn for all eternity. Hot,searing,steaming caves, filled with white hot flame and burning embers and while that might well be true, to most southerners' way of thinking that's only a hot tub and a full body massage away from a week at a Sandals Resort. Everyone has heard the quote," Revenge is a dish best served cold" well to my mind, Hell would be better served and far more well,,,, hellish if Ice,sleet,snow and sub zero temperatures replaced Dantes classic vision of our collective afterlife nightmare. This was no place for a Southern boy he thought.
Winter was surely Hell on Earth,,,,,,,

What kept him going when the "hawk" came out of the north was the that tiny little island that he kept wrapped away in the safest corner of his mind. He pulled the blanket away at times like this and let just a little Carolina sunshine warm his soul. Soon he would head south again and he would leave this waking nightmare behind, but for now all he could do is think of summer, and beaches and warm evening breezes. Slowly a faint smile creased his tired wind burned face and he pushed back  all other thoughts as he worked, fought and lived only in future time now. For a day when the time, temperature and Latitude  would all come to mean the same thing.
Home,,,,,,,,,,,